In this time of mostly virtual meetings and staff Raquel and I were so glad to see that Myriam was traveling to New York for a 2 week in-person stint.  Anytime we are together is call for a celebration so we cooked a lunch of salad, grilled veggies and sauté wild caught cod.  It was delicious and the company was great… 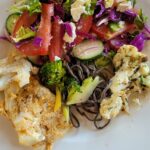 Since last week it seems I have so many to choose from, a favorite that seems to pop up for so many is “no good deed goes unpunished”, I would like to add my take, “so choose wisely and know there may be consequences”.   I would love to hear and share anecdotes to see what some of you are encountering (not too personal), it could helpful to compare notes.

We have been hearing about the IRS employee shortage and increase in responsibilities and the effect of this on the processing of returns, extensions, estimates and notices.  Most recently we are hearing that to the extent these pieces of mail include checks, many are going uncashed, creating even more stress for taxpayers.

The IRS is Suspending the Mailing of Prior Tax Year Notices

Recent reports from the IRS Tax Commissioner indicate that due to errors in notices sent to taxpayers they are suspending the mailing of notices specifically in relation to the filing of prior year tax returns.  Their reason of course is the approximately 260,000 notices to taxpayers stating they haven’t filed their 2019 federal tax return, many of which are sitting in the IRS correspondence backlog.  Their latest update is that they are down from 17 million to 10 million, progress!

Many taxpayers are frustrated that timely submitted tax returns are still not processed.   It’s hard to be patient, but the good news is that the “date stamp” on prior year’s e-filed tax returns allow the IRS to accurately calculate and include interest on refunds.

The SEC Has Enhanced their Crypto Assets and Cyber “Watchdog” Unit

In an effort to find fraud in the financial industry, the US Securities and Exchange Commission announced last week that it is adding new positions to its team policing cryptocurrency markets.  They will continue to focus on investors access to the crypto markets and look to protecting taxpayers from unscrupulous.  The SEC reports that since 2017, their cyber unit has cracked down on more than 80 alleged violations of investor protection and transparency rules, including unregistered investment offerings and conventional investment scams such as Ponzi schemes involving cryptocurrencies.

A group of tax enforcement leaders from five countries, including the U.S., are collaborating on ways to investigate the use of nonfungible tokens and decentralized finance exchanges by tax criminals.

The Joint Chiefs of Global Tax Enforcement (J5) brought together a group of investigators, cryptocurrency experts and data scientists this week in London so they could coordinate on tracking down individuals and organizations committing tax crimes around the world. The event, known as “The Challenge,” includes experts from the U.S., the U.K., Canada, Australia and the Netherlands with the goal of optimizing the use of data acquired from different open and investigative sources available to each country, including offshore account information.

This year’s iteration of the Challenge focused on nonfungible tokens (NFTs) and decentralized exchanges (DEX), the cryptocurrency exchanges often used for decentralized finance, or DeFi, transactions.

The NYS Assembly and Senate passed bill A10080/S8948 that, for 2022, extends the date for pass through entities to elect into the PTET to September 15, 2022. This is a big win for NYS S corps and partnerships. Entities, especially those that would qualify for Resident S Corporation status that did not elect by March 15th, will now have a second chance to elect once the Governor signs the bill.

As part of the extension, estimated payments will be accelerated based on the date the election is made. We will follow up on this development once the law is signed.

Extension Tax Returns with Balance Due not Fully Paid

Now that April 18th is a “fond” memory, it’s time to get kraken on those extended tax returns.  For those of you who have filed timely extensions with insufficient funding, please pull together your missing documents so that the actual tax returns can be finalized and submitted.  Remember the extension was an extension of time to file, not an extension for time to pay, so any balance due will continue to accrue interest (don’t ask how much), let’s just get those returns finalized and submitted.

The Federal Reserve increased interest rates by a half percentage point. The increase is the largest that the central bank has raised rates in 22 years, and is meant to curb inflation, which the worst America has seen in 40 years.  This interest rate may impact many taxpayer’s who have underpaid their 2021 tax payments and estimates.

April saw 428,000 jobs added to the economy, marking the 16th straight month of job growth. The US job market has almost completely recovered from the pandemic, being only 1.2 million jobs away from pre-pandemic levels.

Some banks quicker than others to raise rates on savings accounts

Several banks have raised yields on savings accounts – welcome news for savers who have suffered from low returns and record inflation. Some institutions are moving faster than others in making these changes.

Used vehicle prices lowering but still up 14% over last year

Used car prices have dropped 6.4% since reaching an all-time high in January, potentially signaling the end of the surge in prices driven by inflation and supply chain shortages for new vehicles.

All three major US indexes decreased on Friday, despite a promising increase in job growth for April. Analysts expect skepticism in the market to persist until inflation appears under control.

Intuit, owner of TurboTax, to pay $141 million in restitution

On Wednesday, New York’s attorney general announced that TurboTax used misleading methods to encourage low-income Americans to use their commercial service to file their taxes instead of free, federally-supported programs.

There is a trend among American billionaires seeking a ‘plan B’ to living in the United States. They cite the pandemic, climate change, and political turmoil as the top reasons why they invest heavily in foreign countries in exchange for “golden passports”.

A Florida pension fund sued Musk and Twitter on Friday, seeking to stop Musk from his $44 billion takeover of the social media company before 2025.

We sincerely hope that you and your family are well and remain well. If you have any questions or concerns, don’t hesitate to reach out to us. We are all in this together!

If you need help with your accounting, want to create a tax minimization plan, want to discuss your business growth plan or your finances, are concerned about retirement goals or need to be held accountable for your 90 day action plan, contact us for a complimentary discovery session or an appointment to just get started.

Want to grow your business? Our Complimentary Resources will Help